The Growth and Migration of QAnon and Domestic Extremism – Part 1

By Sam Clark & Mark Ledwich, in partnership with Harmony Labs

Events of the last three months have revealed the decline of shared truth and trust in American civic life. One of the starkest examples of this can be seen in the partisan-right QAnon conspiracy theory. To believers of this conspiracy, the opposition party is not just led by politicians with policy views that differ from their own, but by a cabal of satan worshiping canabalistic pedophiles. While most find this conspiracy outlandish, recent polls estimate that it is believed by 17% of Americans.
‍
Pendulum and Harmony Labs are partnering to do the most comprehensive analysis to date of QAnon content on YouTube, Bitchute, and Rumble. This is the first of a series of reports that will illuminate the community that has gathered around this content, and it will focus exclusively on the unique data Pendulum has on over 500 of the largest QAnon channels and video “view” data from the 270,000 videos uploaded by them. Subsequent reports will combine this data with web panel data to provide insights around demographics and content consumption behaviors of QAnon followers.
‍
Some high-level takeaways from this initial report: 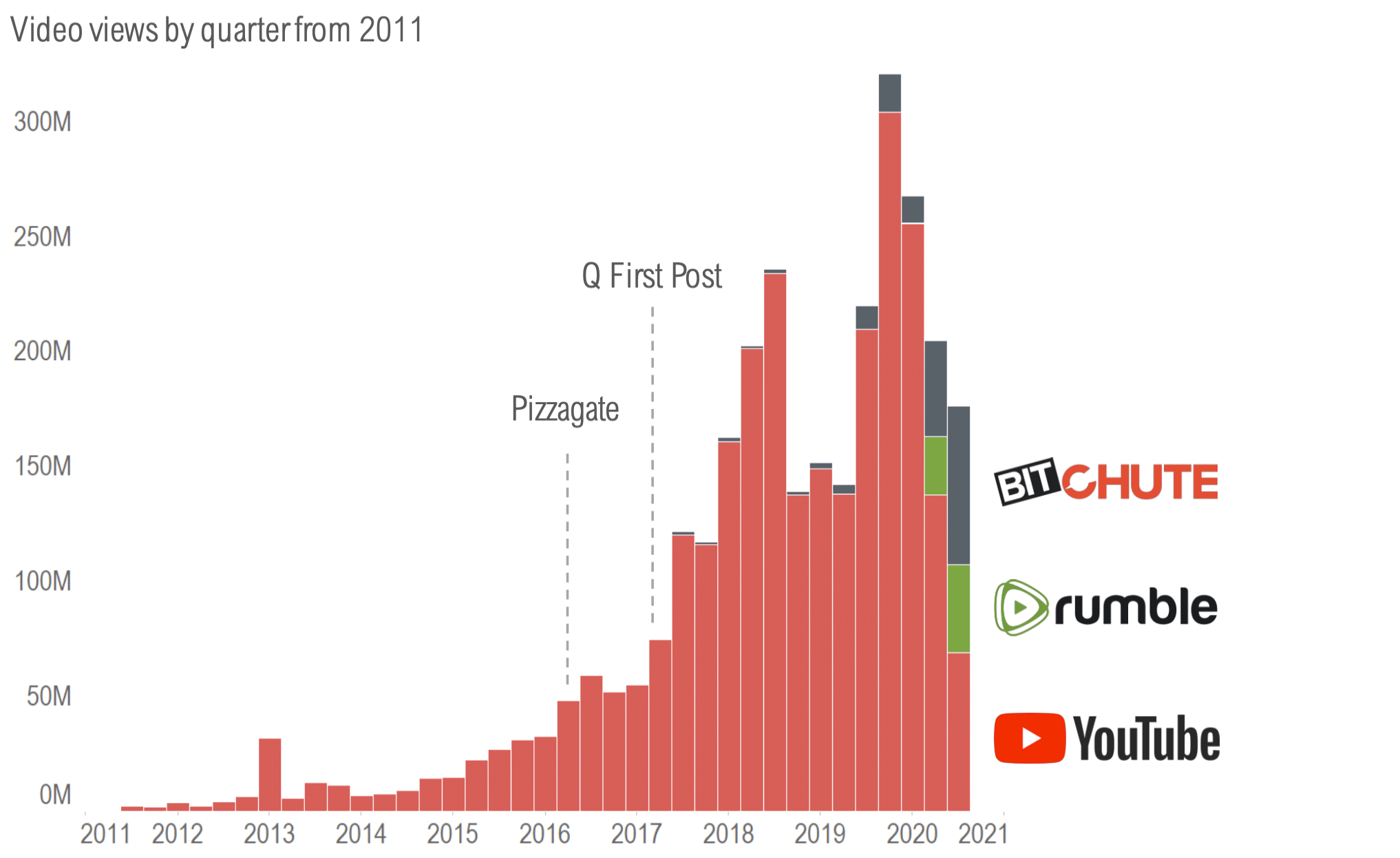 The QAnon conspiracy theory officially started with Q’s first post in October 2017. A number of channels responsible for posting significant amounts of QAnon content existed before then, but with a much smaller following. Some of these channels discussed other conspiracy topics, such as “Pedogate” and “Pizzagate”, that became foundational pieces of the QAnon conspiracy.
‍
In years following the start of the QAnon conspiracy theory, these channels (as well as newly created ones) saw rapid growth. Total views went from 75M in Q4 2017 to 235M in Q1 2019. However, in January 2019 the YouTube recommendation system was updated to reduce the frequency the algorithm recommended conspiracy videos. This resulted in views dropping to an average of 142M for Q2/3/4 of 2019. This drop was short lived, though, and with the rise of YouTube viewership in 2020, QAnon channel views rose again to all time highs.

Note - Q1 2021 data in the chart above only covers data from January 1st to February 7th. 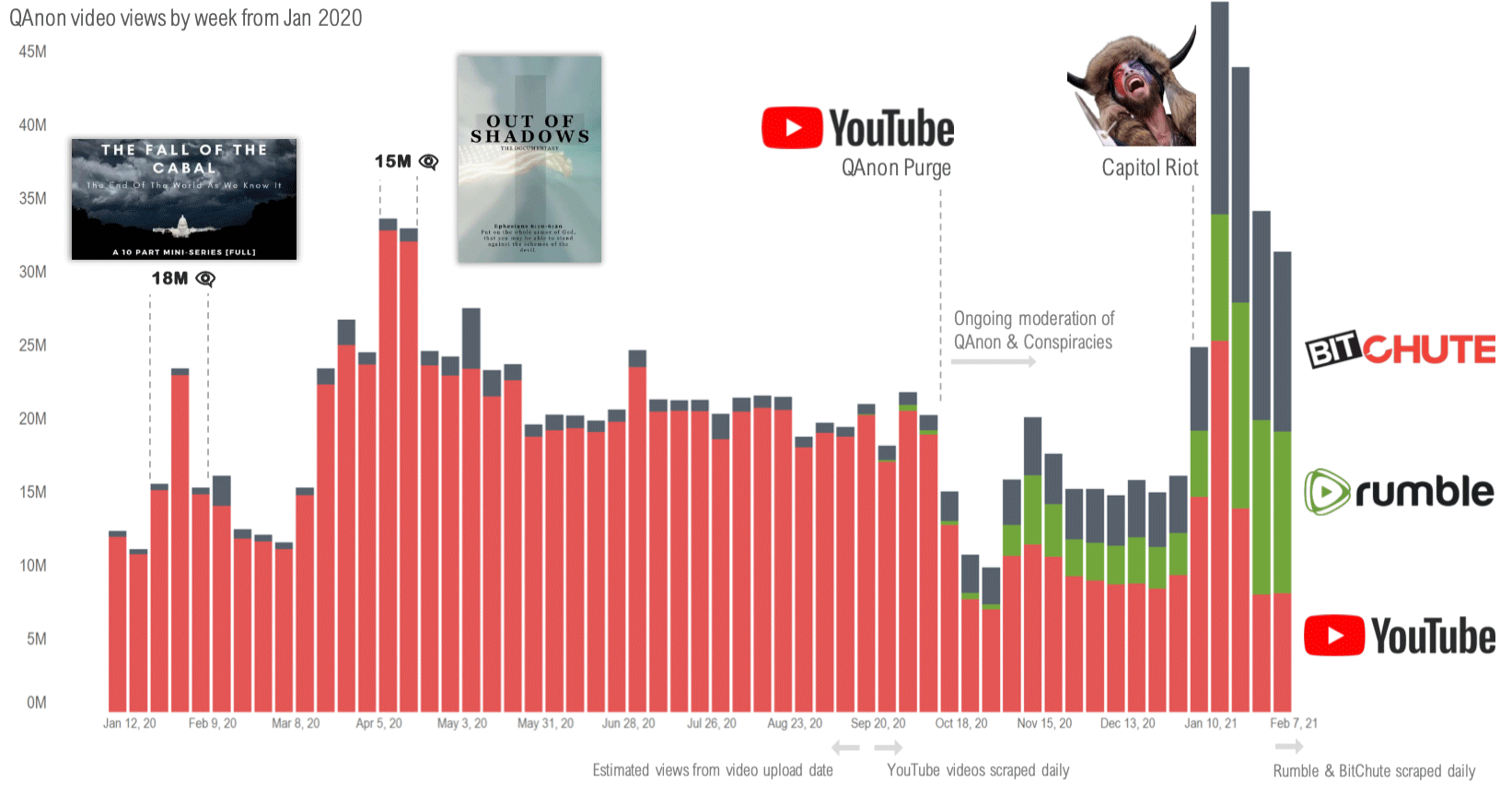 The period between the start of 2020 and writing of this report covered a number of significant events for QAnon on video platforms. Viewership rose to all time highs in April 2020 likely due to the popularity of “The Fall of the Cabal” series and “Out of Shadows” video. After retreating to a slightly lower level, views remained flat between May and October.
‍
In October, following bans by Twitter and FB of QAnon content, YouTube cracked down QAnon content as well. Channels received 2.7M daily views for the 30 days preceding the Oct 2020 crackdown and dropped to 1.3M after - about half. However, this crackdown resulted in a significant number of QAnon followers shifting to Bitchute and Rumble during this period and by Dec 2020 QAnon channels were back up to receiving 2.2M views daily.
‍
This was then followed by a significant increase in QAnon channel views after the Jan 6th insurrection. In Jan 2021, QAnon channels received 160M views which was 30% higher than the previous highest viewed month, Apr 2020. During this period, for the first time, BitChute and Rumbles combined traffic also exceeded YouTube. This marked a significant acceleration in the QAnon communities migration to alt-platforms.

The decentralized nature and the migration of QAnon video consumers from YouTube to BitChute and Rumble has created a variety of winners and losers. This can be seen in the chart below where four out of the top 10 most viewed channels in January 2021 had a negligible following prior to October 2020. 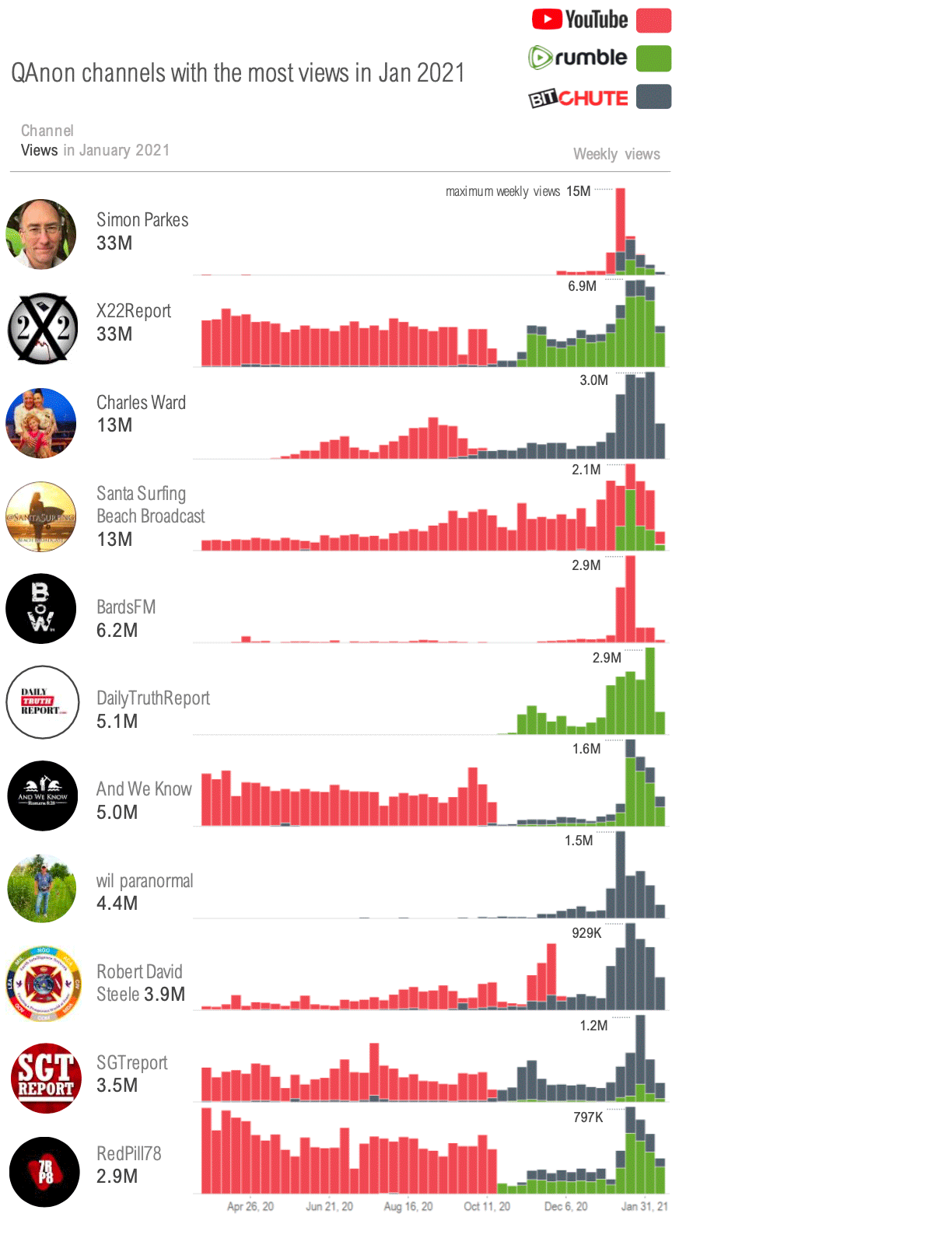 As the largest video platform in the world, YouTube has played a key role in the spread of the QAnon conspiracy since its inception in October 2017. More recently, due to crackdowns by YouTube on QAnon content, the alt video platforms BitChute and Rumble have become popular sources for this content as well. While data on these video platforms is publicly available, the medium and scale make it very challenging to analyze content on them.
‍
To help overcome these challenges, Pendulum developed a method to automatically discover and classify YouTube channels.This was used to identify a set of over 7,300 english language political and cultural channels on YouTube, all with over 10,000 subscribers. QAnon channels are a subset of political and cultural channels and the previously mentioned method was used to identify 374 from the complete dataset. QAnon channel discovery was first done in September 2020 then again in early January 2021. After identifying QAnon channels, they are added to a pipeline which scrapes information about videos uploaded by them daily.
‍
To identify QAnon channels on BitChute and Rumble, links from a publicly available Parler dataset and YouTube QAnon channels were used to find candidate channels on these alt-platforms. These candidate channels were then matched automatically into the YouTube QAnon channel set using title information or manually reviewed. This resulted in 127 BitChute QAnon channels and 59 Rumble QAnon channels.
‍
The reliance on automatically identifying QAnon channels is crucial given the amount of time it takes to review a single YouTube channel to classify its content. However, to determine the accuracy of our method, as well as generate training data, 124 out of the 560 total QAnon channels have been manually verified. Information on all QAnon channels in the dataset can be found in this spreadsheet. This includes information on total views and videos uploaded since October 2017, date YouTube channels were removed (if applicable), and the total videos removed from each channel.
‍
In addition, information on the top 100 videos from QAnon channels can be found in this spreadsheet. It is important to note that all videos from QAnon channels are not explicitly about QAnon. Some videos cover other conspiracy topics as well (especially since the beginning of the COVID 19 pandemic) and a small number are not about conspiracy topics at all. However, a significant majority of videos from these channels directly cover QAnon. From the top 100 videos, 65 have been removed by YT (which is a strong signal they contained QAnon related content). From the remaining 35 only 7 cover a topic that is not QAnon related.

QAnon has grown from a fringe conspiracy to a mainstream belief with a significant community built around it. Many members of this community were involved in the January 6th insurrection, showing the real world impact belief in the conspiracy is having. Understanding the sources of QAnon related content consumed by this community is more important than ever.
‍
This report has analyzed the scale of content and its viewership on the primary video platforms QAnon content has spread on. We believe this provides a number of interesting insights into the growth of content on these platforms, impacts of YouTube recommendation algo changes, and impact of deplatforming the QAnon community on YouTube.
‍
In subsequent reports we will go a step further with Harmony Labs and take a deep look at the demographics of QAnon content consumers, adjacent content they consume, and other patterns that shed light on the QAnon community and how those in it were radicalized.

Manual labeling of QAnon channel was done using the same methodology used for labeling of soft tags for our prior work on Transparency Tube. It is outlined in Ledwich and Zaitsev 2019. To be labeled as a QAnon channel, 30% or more of a channel’s top viewed videos must discuss QAnon in some way that is supportive of the conspiracy or indicates the video creator believes in the conspiracy. There are a large number of ways this can be communicated. Some of the most common are: “Q” imagery in the video, discussion of “Q” the person, elites committing pedophila, Trump fighting the “deep state” cabal, ensuing mass arrests of democrats, and belief JFK Jr is still alive. There is significant literature on the topic, so we will not cover all Q specific topics here. Reviewing videos can be very time consuming, so fortunately we can search transcripts in many cases to identify places the above topics and others are discussed and review those specific sections alone.
‍
As indicated above, YouTube channels that are not manually labeled are labeled using an automated method we have developed. This method relies on applying a shallow neural network to publicly available subscription information for commenters. It has a precision of 0.78 and recall of 0.85, which is impressive given the small percentage of political and cultural channels that are QAnon channels. However, it does mean that one out of every five channels predicted to be a QAnon channel is not a QAnon channel. This error rate is acceptable though for our use of estimating aggregate view statistics. Especially when considering the large percentage of channels in our dataset that have been manually labeled.
‍
We’ve also run experiments showing our subscription based automated channel classification approach performs much better than approaches that use video title, description, and transcript data to classify YouTube channels. This is especially important with QAnon channels, where an automated approach that uses video metadata would struggle with classifying videos debunking or reporting on the QAnon conspiracy.

To determine the number of views a video and channel has received in a given day we scrape video view stats daily. For each video, views received in a given day is measured by subtracting the number of views shown on the video page on the current day from the number shown on the page the previous day. The number of views for a channel for a given day is then the sum of all views from the channel’s videos for that day.
‍
However, for videos uploaded prior to the start of our data collection, we need to use another approach. YouTube QAnon channels were originally identified September 2020 and another small batch was identified in early January 2021. All BitChute and Rumble QAnon channels were identified in early Feb 2021.
‍
For videos uploaded before a channel is identified, we assume the majority of its views came on the upload date and subsequent days and distribute them accordingly. This is the case for the majority of videos (especially news coverage), but there are a small number of videos that do become popular months or years after they are uploaded and receive the majority of their views much later than their upload date. Unfortunately there is no easy way to account for this.

Finally, due to the churn of channels, we are likely missing YouTube Q channels that were removed before Sep 2020. Given the fairly lax moderation of Q before then, we don't think these missing channels would change results significantly.

Get in touch to schedule a demo. We'd love to show you what Pendulum can do for your company.

Get Pendulum news and updates